Our Employee Celina Serving in Ethiopia 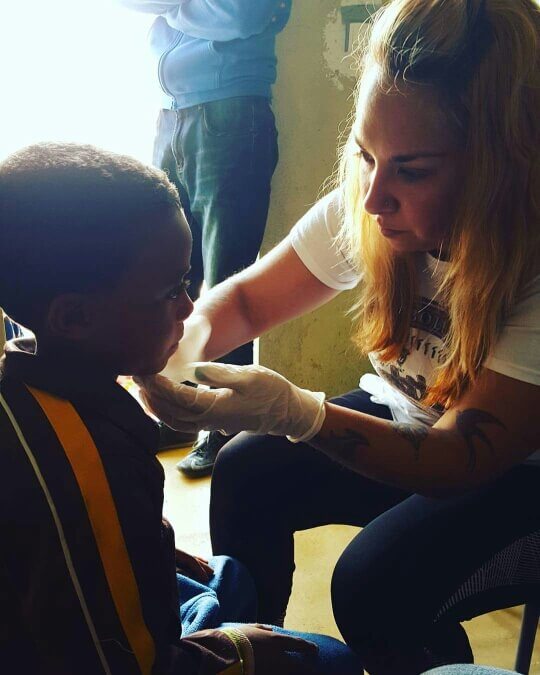 Where would we be without the charitable acts of kindness shown to those so much less fortunate than ourselves?  It takes a heart of passion and love to change the future of a child whose lives and opportunities are limited by poverty, lack of education and disease.  One of these such passions was recently carried out by Celina, a wonderful optician here at the Eye Care Center.  Here is her story:

In January, Celina joined a group from her church who partnered with a school called Bright Future, headed by Dr. Telargi, whose mission was to speak with head officials in Africa and agree to terms of expansion of a new school for the children in Ethiopia.  This school, which they named Thrive Academy, houses more than 150 students each day and is full to capacity, currently with 4 classrooms of 30+ kids.  They spend their learning days shoulder-to-shoulder, foregoing chairs and desks, as there is just not enough space.  After a very difficult and arduous process attempting to meet with head officials, Dr. Telargi was ultimately successful in obtaining the approval for expansion of their school, which projects to be 10 times the amount of land they currently inhabit.  This was an enormous accomplishment!

With a total of 14 people in their missions group, Ethiopian government was not the only obstacle they had to endure.  The simple act of traveling between the U.S. and Africa brought the hurdle of customs.  Their goal was simple: to gather and pack as many school and medical supplies as possible in order to leave them with a supply large enough to last until another group can make it back to Africa.  Unfortunately, this is no easy task!  Customs into Ethiopia is under the assumption that goods being brought into their country are going to be sold for profit as opposed to given as gifts of donation and charity.  Therefore, each and every person’s belongings are gone through with a fine-tooth comb; the process long and grueling, and forcing Celina’s group to get very creative with their packing of items…

Celina spent her time in Ethiopia playing with the children and teaching them necessary life skills to help create communities and jobs.  She and her group sought out the poorest families to take their classes; teaching them things like how to save money in order to be successful and provide for their families and communities.  “We don’t just want to go and give them immediate relief and then leave them not knowing what to do next.  Unless they are taught, how are they going to thrive?” stated Celina.  She was personally touched by a story she shared, about a woman she met who sells beans and rice for a living.  Celina’s group funded this lady in order for her to take a class to learn how to make her business successful, and within months of applying what she had learned, she was able to triple the amount that was funded to her.  This particular woman has a daughter who attends Thrive Academy school and is HIV-positive.  With the heart of a mother, her one and only goal in life is to be able to provide for the care of her daughter when the day comes that she is no longer able.  The education Celina’s group was able to provide has changed the lives of this woman and her daughter!

With the nearest hospital three to four hours away on foot, health care is the other major mission this group carried with them.  Eye infections are prominent among hundreds of adults and children in that Ethiopian area.  Celina’s group included a nurse who was able to provide antibiotic eye drops in order to help clear up the infections.  They got to witness those with swelling, crusting and weeping go from the inability to see at all to completely clear, healthy vision within a week.  This brought them such happiness, as they have virtually no access to healthcare whatsoever.

This experience changed not only the lives of those in that Ethiopian community, but Celina’s life as well.  She has developed a passion for missions and healthcare for those who are poverty stricken, prompting her to pursue a nursing or medical degree in the near future.  She states that she has been asked, “Why go to another country for missions when we have need in our own country?”  Her answer?  “If we don’t go, then nobody goes, and they die.  Our American country is so fortunate to have access to help in endless abundance.”

How grateful we are to have an optician with such a heart of compassion working with our patients who we care so much about.