This Won’t Hurt a Bit…

As promised, here is a recap of my first experience with the Dermapen!

Now I knew that this microdermabrasion deal was going to be a breeze, I had already used one of those at-home Neutrogena units many times in the past, just a little exfoliating cream on a sponge with a vibrating head, no pain at all. I was excited for this part, only nervous for the needles!

I laid down and Tamara pulled my hair back, like the start of any great facial. She cleansed my skin to remove oil and makeup and I began to feel myself relax. When you have a massage expert and facial master washing your face, let me tell you… it’s nap time.

It didn’t take long before she brought out the microdermabrasion machine. I opened my eyes and said, “what on earth is that?!” It looked nothing like that cute little Neutrogena wand I was familiar with. This is surely something else. Apparently a real microdermabrasion is quite different from the kind you can get at Target. Who knew!

Tamara explained to me that this device, made up of two tubes, worked by sending tiny exfoliating crystals down the first tube onto my skin; the second tube functioned as a vacuum, sucking the crystals back up after they had circulated for a moment, and allowing new ones to enter. I won’t lie to you. This process did not feel particularly relaxing, at all. It was certainly a tolerable sensation, but nothing like the facial massage I experienced moments before.

I decided, somewhere during the process, to look at this from the sunny side. I am the type of girl who is obsessed with exfoliating cleansers. Scrubby, beaded, gritty face wash has been my favorite kind of daily cleanser for years. My skin doesn’t feel clean without it. I just like to feel things working, and I could definitely tell this was working as I laid there.

One more relaxing cleanse to remove the remaining crystals from my skin and then it was on to the Dermapen! The needles! But not before a half-hour worth of numbing cream. You give a nervous girl some of this cream before taking needles to her face and it’s only natural for her to start poking different areas from nose to cheek to chin to make sure this stuff was actually working. Thank God nobody was filming that; I would have been a You-Tube sensation!

Post numbing and my face felt funny, so I figured the cream worked. Tamara applied a cool serum to my face containing hyaluronic acid, a moisturizing serum. And then the Dermapen came out! I closed my eyes and Tamara began by running it along my forehead, as she did this she explained that the forehead can be a more sensitive area due to the fact that there is not much cushion underneath. But, she let me know that, even in these sensitive areas, she still believed the treatment to be very “bearable.” Bearable?? “Oh gosh,” I thought to myself, “this is about to hurt!”

And guess what? It didn’t! In problem areas where I have scaring, like on my cheeks, Tamara used a deeper needle setting for better results. In those areas, I felt a faint sensation of the needle, but certainly no pain. Quite honestly, I found the entire Dermapen treatment to be more comfortable than the microdermabrasion, and even more comfortable than the St. Ives scrub that I used to use on my face, (which apparently is a no-no).

I had planned to leave the appointment with very red skin, so I made plans in my head about how I was going to get from the Aesthetics center back to my office on the opposite side of the building without anyone seeing my tomato-like face. Upon looking in the mirror, I was pleasantly surprised to see just a little bit of redness, my skin looked shiny and tight. No alternative route needed!

In the days following my appointment, my skin continued to feel tight and it got dry and flaky in some areas. It was also a little bit swollen for a few days, not post-wisdom-teeth swollen, but swollen enough to fill in my scars and make them look much smaller! Dr. Meyers had warned me that this would happen prior to my appointment. He told me not to get too excited, as the swelling goes down after a couple days and the scaring will be visible again. Only after a series of treatments will I notice a lasting difference. But I savor these days! I am getting excited about how great my skin is going to look in a few months, and after a few more treatments. I’ve noticed some new blemishes in the past few days since my appointment as well. It looks like all that exfoliation has successfully brought the bad stuff to the surface! I’ll take it with positivity, because sometimes things have to get worse before they can get better.

I am actually looking forward to my next treatment! More to come..

The Eye Care Center of Northern Colorado is now scheduling routine and well-eye exams beginning the week of May 11, 2020 following the guidance set forth by the Governor of Colorado and Boulder County authorities. Our first priority is the safety of our patients, staff and community. We are taking every precaution possible to ensure that social distancing is maintained while patients are at our clinic. We are also carefully following the recommendations of the American Academy of Ophthalmology and the CDC. We will continue to require all patients to wear a mask and ask that family members wait outside, unless needed for patient mobility and/or proper communication. Of course, minor children may be accompanied by an adult. To schedule an appointment, please call 303-772-3300. We have also resumed more routine surgeries at Advanced Vision Surgery Center in addition to emergent and urgent procedures. 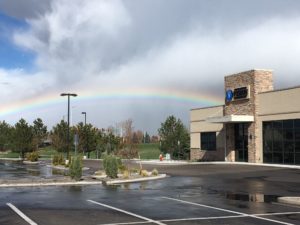